Several things have happened the last few days that I've been wanting to blog about, but haven't had time! The latest "big" news with Jack is that he is back to wearing an eye patch. He had a follow-up appointment last week and the doctor would like him to wear a patch 4-6 hours/day for one month. I was "reprimanded" by the doctor for not putting the patch on him for the first 2 weeks (um, when he was sick with an ear infection, bronchitis and had a fever of 102-104* for 5 days...which I explained to the doctor), but he said that he saw some improvement just from the few days that Jack had worn the patch. Thankfully, I found a website for a patch called Framehuggers and we ordered one for Jack. It is blue with a picture of Woody (from Toy Story) on it. He fought us the first time we put it on, but he has done awesome with it since then. He left it on for a whole 6 hours this morning without complaining! Praise the Lord! It is such a relief to know that we are doing something to help his vision...but we don't have to torture him in the process. Here's a picture of the little man with his new patch on. 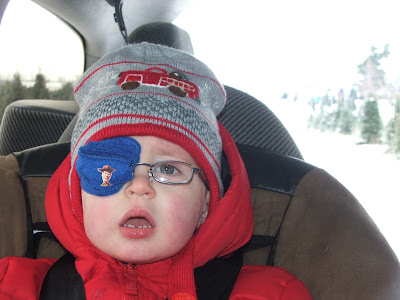 He was complaining in this picture because we were out getting our Christmas tree and he was tired of waiting in the car. Which brings me to my next topic...our Christmas tree. We have made it a tradition to go out and cut down our own tree every year. This might possibly be the last year of that tradition. For starters, it was 5* outside when we were looking for our tree. That is so cold. It hurts. Second, the closest tree farm (that we know of) was 30 minutes away. Third, the tree was still over $50. Fourth, Jack refused to walk through the snow, so we had to carry him the entire time. Holding a 35 lb. toddler while trudging through the snow is a quick way to wear yourself out. Fifth, by the time we drove out to the farm, found the tree we were looking for and loaded it on the car, it was lunch time. Jack was hungry and cranky (and he wasn't the only one!). So we had to eat lunch out. So...was the real, live tree worth all the hassle? I don't know. I think we might browse the artificial trees while they're on sale after Christmas. I might have to eat my words. Here's a picture of our tree at the farm. 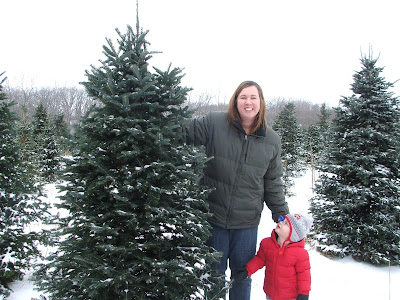 Oh, another thing about buying a Christmas tree when it's 5* out....there was ice all over it. I mean...our tree was encased in ice. Not like an icicle here and there. No. Every needle had ice surrounding it. We had to bring the tree inside, put a bunch of towels under it and let it thaw out. Nice big puddles on the floor. It was kind of weird. Anyway, here's the tree after it was all prettied up. (I know, it's dark...but I couldn't get a good picture with the flash on.) 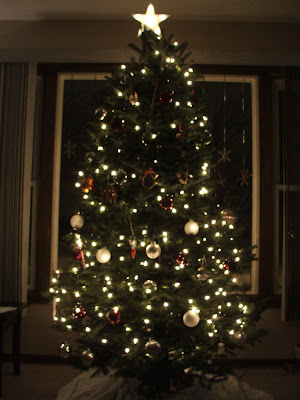 Here's how I survived the morning... 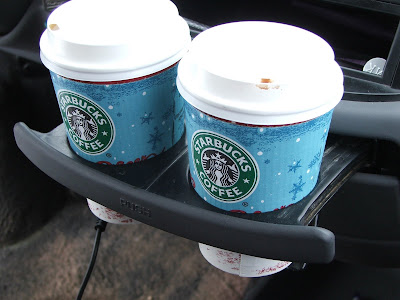 and how I passed time while Lonnie was loading the tree onto the van... 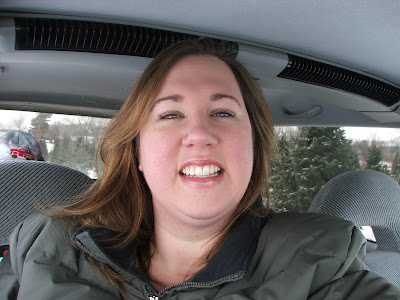 Here's my strapping young husband tying the tree onto the van. He did an awesome job. It didn't fall off once. 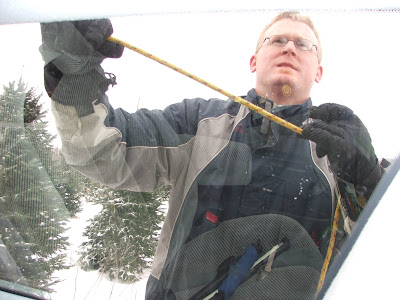 Oh, there is more I want to write about, but it is getting late. I hope you all are having a wonderful time preparing for Christmas. Stay warm! :)
Posted by Stephanie at 7:45 PM

Fake tree = so the way to go. Cheaper in the long run, and you don't have to worry about fire or water or any of that. (And some come now with the lights already on them!!) Oh, and you don't freeze your buns off when you put it up.
Your tree is georgous, and Jack is adorable with the glasses thingy...that must be easier than those stupid patches. (Has anyone slapped that doctor yet? He sounds so MEAN. Like a total MEANER!!)
You look great too, I totally miss you but am so glad that you are all finding your place there in the freezing cold. And hopefully you will be back for a visit soon!!